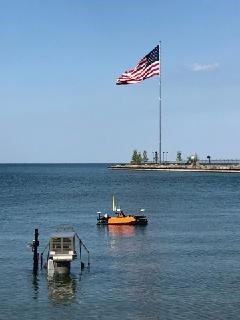 If you are in need of survey and/or inspection support, the team at Walsh Service Solutions can help.

Bathymetric, or hydrographic surveys, refer to submarine topography. Bathymetry is the foundation of the science of hydrography, which measures the physical features within a water body.

Bathymetric survey service can include:

USVs are a revolutionary platform that can carry all kinds of sensor arrays for hydrographic survey. Our USV has a footprint of only 78″ x 42″ x 32″, allowing it to fit in small vans. With a weight of 121 pounds assembled, and with the ability to be disassembled into parts weighing less than 44 pounds, a single operator can launch a USV.

Our USV is the ultimate hydrographic survey tool with its robust catamaran design and tightly integrated bathymetric survey sensors. This system is a cost-effective turn-key solution for bathymetric surveys in sheltered waters such as small lakes, canals, rivers, ponds, and harbor areas. Its tight integration between the on-board control system, that enables autonomy, and the single or multi-beam echo sounder, a bathymetric survey can be executed with a simple, streamlined, safe, and effective workflow.

Drones are continually proving to be powerful commercial tools, simultaneously providing leaps in efficiency and safety. The surveying and mapping industry is no exception. With the ability to capture data from above, drones have been successfully integrated into surveying workflows to perform land surveys, photogrammetry, 3D mapping, topographic surveying, and more. Drone surveys are also highly accurate – in an independent study by DroneDeploy, our drones achieved 2 cm relative vertical accuracy and 1.20 cm relative horizontal accuracy.

What kinds of deliverables can you achieve with drone surveying?

Depending on the choice of data sensors and surveying software, drone surveying can produce a variety of deliverables with use cases in many industries: